Get Up and Running With OCaml

This page will walk you through the installation of OCaml and the Dune build system, as well as offer support for your favourite text editor or IDE. These instructions work on Unix-based systems like Linux and macOS, and there are also instructions on how to install OCaml on Windows.

It's a straightfoward process to install OCaml. Opam is OCaml's package manager, so we'll install it first. You will also use Opam when installing third-party OCaml libraries.

Find the all installation instructions for both Unix-like systems and Windows below. If you're new to the CLI, the code blocks (in black) show the required commands (the text after # gives more information on the following commands). Type each command after the prompt $, although it's often represented by a %, >, or another symbol as well. Ensure you use the exact case and spacing shown, then hit return/enter at the end of every line.

Installation for Linux and macOS

For Linux the preferred way is to use your system's package manager on Linux (e.g apt-get install opam or similar). Details of all installation methods.

Install Compiler It's essential to install the OCaml compiler because OCaml is a compiled language, so please don't skip this step. The first part sets up Opam, and the second part installs the OCaml base compiler:

After the opam init command, you might get a result asking if you'd like to update your zsh configuration. If you get that message, type in N, the default, then type y to install the hook, which will run eval $(opam env). As you get more well-versed in OCaml, you can change these settings by rerunning opam init.

Please note: The back ticks shown around opam env after eval are essential. They change the order of application, which is very important. The back ticks tells the system to first evaluate opam env (which returns a string of commands) and then eval executes those commands in the string. Executing them doesn't return anything, but it initializes the Opam environment behind the scenes.

Check that the installation was successful by running opam --version. Please note merely using opam init might install a previous version of Opam. The most current version can be found at opam.ocaml.org.

Next, check that OCaml is installed properly with the following commands. The line beneath the $ command shows the desired output for both the OCaml version and the toplevel version (installed specifically with the above switch command):

As an alternative for either Linux or macOS, a binary distribution of Opam is available:

OCaml on Windows is still a work in progress. In the meantime, if you only need to run OCaml programs on a Windows machine, then the simplest solution is to use the Windows Subsystem for Linux 2 (WSL2). WSL2 is a feature that allows Linux programs to run directly on Windows. WSL2 is substantially easier and faster to use than WSL1. Microsoft has comprehensive installation steps for setting up WSL2.

On the other hand, if you need Windows binaries, you will have to use the OCaml for Windows installer which comes in 32bit and 64bit versions. This installer gives you Opam and OCaml installations all in one go. It's used from within a Cygwin environment, but the executables produced have no dependency on Cygwin at all. For a more comprehensive update on the state of OCaml on Windows, see the OCaml on Windows page on the old version of the site.

Toplevel is a read-eval-print loop (REPL). It's one of the things that makes OCaml so efficient because it compiles while you code, allowing for iteration.

OCaml comes with two additional compilers: one compiles to native code (sometimes called machine code or executable binary), directly read by the CPU, and the other compiles to bytecode, creating an executable that can be interpreted by a variety of runtime environments, making more flexible.

For now, let's first use the recommended toplevel, which we installed above:

We typed the phrase 1 + 2 * 3 and then signalled to OCaml that we had finished by typing ;; followed by the Enter key. OCaml calculated the result, 7 and its type int and showed them to us. We exit by running the built-in exit function with exit code 0:

Note that OCaml also has an older REPL, using the ocaml command. However, this REPL does not have history or tab-completion, so we recommend always using utop.

Dune is a build system for OCaml. It takes care of all the low level details of OCaml compilation. We installed it with opam, above.

Let's begin the simplest project with Dune and OCaml. We ask dune to initialize a new project, and then change into the created directory:

We can build our program with dune build:

Let's look at the contents of our new directory:

The source code for the program is found in ./bin/main.ml and any supporting library code should go in lib.

To learn more about Dune, see the official documentation.

For Visual Studio Code, and other editors support the Language Server Protocol, we use the OCaml language server, which was installed when we installed opam earlier.

Upon first loading an OCaml source file, you may be prompted to select the toolchain in use: pick the version of OCaml you are using, e.g. 4.11.1 from the list. Now, help is available by hovering over symbols in your program: 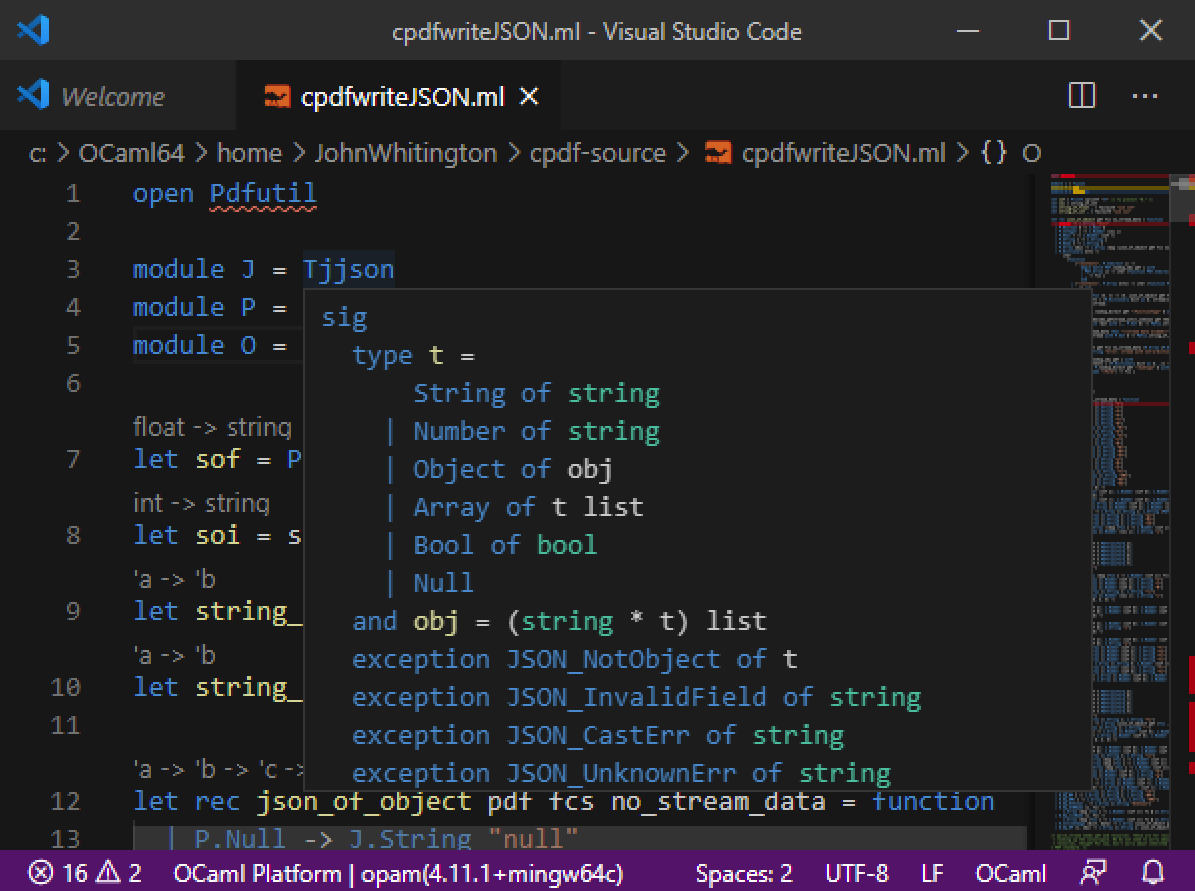 On Windows we must launch Visual Studio Code from within the Cygwin window, rather than by clicking on its icon (otherwise the language server will not be found):

For Vim and Emacs install the Merlin system using opam:

The installation procedure will print instructions on how to link Merlin with your editor.

On Windows, when using Vim, the default cygwin Vim will not work with Merlin. You will need install Vim separately. In addition to the usual instructions printed when installing Merlin, you may need to set the PATH in Vim:

All OCaml docs are open source. See something that's wrong or unclear? Submit a pull request.

Ask the OCaml Community
Open an Issue
ON THIS PAGE